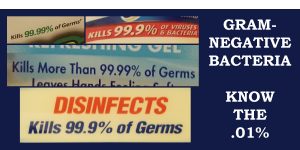 WHY DON’T ANTI-BACTERIAL PRODUCTS WORK 100% OF THE TIME?

As you see in products like yogurt and probiotics, there are beneficial bacteria. WebMD states, “your body is full of bacteria, both good and bad. Probiotics are often called ‘good’ or ‘helpful’ bacteria because they help keep your gut healthy. Doctors often suggest them to help with digestive problems.”

In this instance, we are not talking about good bacteria; we are talking about a tiny percentage of resistant bacteria that lead to chronic disease and even death in mammals. Wikipedia states, “If gram-negative bacteria enter the circulatory system, the liposaccharide can cause a toxic reaction. This results in fever, an increased respiratory rate, and low blood pressure. This may lead to life-threatening septic shock.”

Bacterium is singular; bacteria is plural for microscopic living organisms. MBL states that types of bacteria are based on shape and reaction of their cell walls to certain stain. Bacteria can exist as single cells, in pairs, chains or clusters. They are classified into 5 groups according to their basic shapes:

WHY SHOULD YOU CARE ABOUT GRAM-NEGATIVE BACTERIA?

Wikipedia states, “Gram-negative bacteria are bacteria that do not retain the crystal violet stain used in the gram-staining method of bacterial differentiation. They are characterized by their cell envelopes, which are composed of a thin peptidoglycan cell wall sandwiched between an inner cytoplasmic cell membrane and a bacterial outer membrane.”This outer “shell” is resistant.

For a visual aide, the dot to the right of the golf tee is a tick. Inside any infected deer tick of the genus Ixodes is Borrelia burgdorferi, a spirochete that is the cause of Lyme disease. Left untreated in the early stages of infection, the condition progresses to chronic Lyme disease. An infected tick can transmit B. burgdorferi to the humans and animals that it bites.

GRAM-NEGATIVE BACTERIA CAN BE KILLED WITH A SUPERFOOD

It wasn’t simple, however, as this process took Jeanette Orona nine years of research and trial and error. Frustrated at year two, MDs wouldn’t hear her words; they prescribed antidepressants. Jeanette explained that the pain factor was constantly in the 9-10 range on a scale of 1-10; no prescription pain medication could completely address her level of pain. She literally sat in the doctor’s office sobbing in order for a blood test to be drawn. Jeanette’s black western blot came back positive. It was only then that the MDs believed her.

Jeanette continued to explain what living with gram-negative bacteria and Lyme disease felt like, “I didn’t get the bullseye rash so by the time I tried antibiotics, it was really too late. However, I did try some antibiotics in IV form, but it just made me more ill. I couldn’t eat or even drink water.”

Once a person passes the brief “window” for antibiotics to treat Lyme disease, Orona explains, the condition progresses to chronic Lyme disease. The three words that nobody wants to hear Jeanette heard: “no known cure”. Even at 89 lbs. in weight, Jeanette rejected that statement and kept fighting to survive.

The following years of trial and error with alternative healing methods in the U.S. and Mexico cost more than $200,000 USD. The strain took a toll on Jeanette’s personal life. The love and support of her family, her best friend, and her MD kept her going through the darkest times.

As if by fate in 2016, Jeanette was introduced to a holistic healing center located in a sovereign nation. There, Jeanette learned the basis for healing from chronic Lyme disease: superfoods mushrooms and hemp, oxygen and an aligned mind-body-spirit. Jeanette successfully killed the gram-negative bacteria Borrelia burgdorferi.

The interview with Jeanette Orona, chronic Lyme disease survivor, evolved into a Public Service Announcement (PSA) about how a superfood can kill gram-negative bacteria while chemicals and prescription drugs remain ineffective. We encourage the public to listen to the PSA.